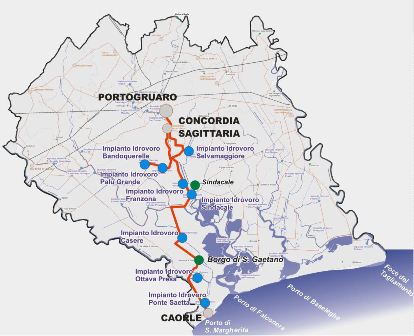 The itinerary from Caorle to Portogruaro is about 27 km. long, because you need to take some diversions in order to visit some urban centres as well as a few buildings having particular features. One of its main stops is the one in Sindacale, the starting point of some outstanding nature trails south of Concordia, which you can travel by car, bicycle or boat. This route goes through wetlands as well as newly reclaimed lands. Travelling by car and making some bicycle excursions enables you to appreciate the mastery of man in reclaiming lands for agricultural use. This land reclamation process has also allowed recovering evocative landscapes and unique evidences of man-nature relationship.

Start: CAORLE
It is an old port city, a bishopric as well as a noted holidays resort. Its cathedral is charming and houses valuable works of art -e.g. the Byzantine golden reredos. Visit also the 18th-century church of the Blessed Virgin of the Angel, which is built on an evocative site. 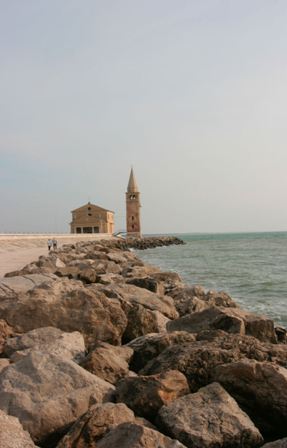 Ottava Presa (E=12:52:20,735; N=45:37:47,375)
From Ponte Saetta take SP 59 until you reach Riello canal. Turn right, stay straight until you reach Strada Ottava Presa, which leads to the homonymous water scooping plant. Built in 1932, it underwent some restoration and upgrading works in 1971 in order to serve the 490 ha-wide basin more suitably. Its circulation is 4,950 litres/second.

San Gaetano water scooping plant
Dating from the early 20th century, it proves Franchetti's efforts to reclaim their lands for agricultural purpose: this family has owned San Gaetano estate from 1879 until the postwar period.

Sindacale
Sindacale lies in a strategic position, where roads and waterways meet. From here you can navigate Lemene waterways heading northward to Concordia and Portogruaro or to Caorle Lagoon. 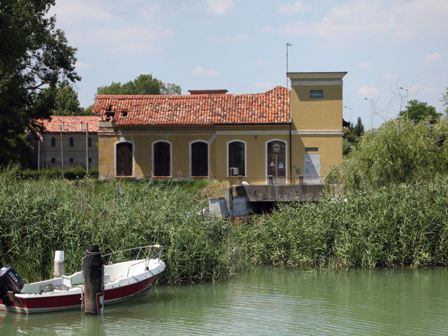 Selvamaggiore water scooping plant (E=12:52:09,394; N=45:44:10,679)
Going on via Lame, you reach the point where Lemene gives rise to Cavanella: on the right, via del Rio leads to Selvamaggiore water scooping plant. Here you can visit the premises and see machines working. The basin feeding this plant spreads over 1,340 ha. The draining installation was engineered by Ing. De Götzen and built in 1929. Restored in 1970 by Pellizzari firm, its circulation is 5,400 litres/second.

Concordia Sagittaria
Retrace your path onto via del Rio, take via Aquileia and reach the historic part of Concordia Sagittaria. The ancient Iulia Concordia in the Roman period stood as the crossroads between Postumia and Annia Roads. In Concordia you find several traces of its past dating from Roman, Early Christian as well as medieval times. Saint Stephen Cathedral is outstanding for its striking beauty.

Bandoquerelle water scooping plant (E=12:49:16,881; N=45:43:36,897)
Follow Lemene riverside and find Bandoquerelle water scooping plant. The homonymous 1,644 ha-wide basin feeds this plant, whose circulation is 7,700 litres/second. It was built for the first time in 1927; in 1960 Ing. Mortillaro supervised its pumps restoration. Its circulation is 7,700 litres/second. Close to the plant lies its attendant's house.

Destination: PORTOGRUARO
Take via Spareda to stay on until you reach Concordia, then head to Portogruaro. 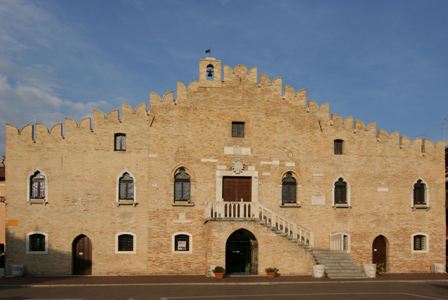