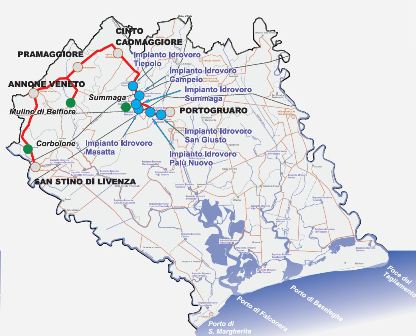 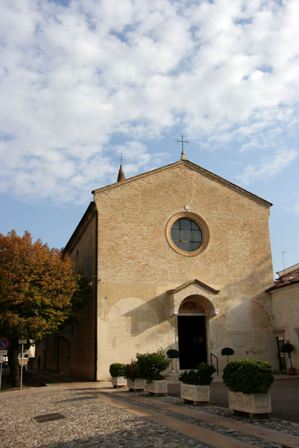 Palù Nuovo water scooping plant (E=12:57:58,521; N=45:40:15,325)
Take SS 14 to go back to the bridge on Reghena River, and then take via Matteotti , then viale Cadorna and viale Treviso. Stay on until you reach via Montecassino. Before reaching the flyover, turn left onto an avenue leading to Palù Nuovo water scooping plant, on Reghena River. Serving an area of 130 ha, its original structure by Reghena Syndicate dates from 1925. In 1931 it was upgraded under Ing. Dal Prà's supervision. It underwent some other restoration works in 1982; these days, its circulation is 2,400 litres/second.

Campeio water scooping plant (E=12:48:33,570; N=45:47:12,169)
Retrace your path to the roundabout, then take via Campeio, where the homonymous water scooping plant lies. This plant dates from 1930 and serves a small 58ha. sub-basin tributary to Reghena River; its circulation is 700 litres/second.

Tiepolo water scooping plant (E=12:48:07,899; N=45:47:42,235)
Head back to viale Treviso, at the traffic lights turn left onto via Villa, and then go on via Cà Tiepolo. Beyond the motorway lies Tiepolo water scooping plant. It serves a small basin (92 ha.) in the outskirts of Portogruaro. The small tasteful building dates from 1930, when land reclamations works were carried out by Ing. Dal Prà. Its circulation is 800 litres/second.

The Abbey of Summaga
In Summaga city centre go on via Treviso and then via Abbazie until you reach the ancient abbey. The Benedictine Abbey of Summaga was built in the 10th or in the early 11th century. Its basilica, whose mediaeval frescos merit a visit, is joined by a Romanesque bell tower. Vine-growing is traditionally linked with the life at the abbey, since its monks introduced it in the surrounding lands. 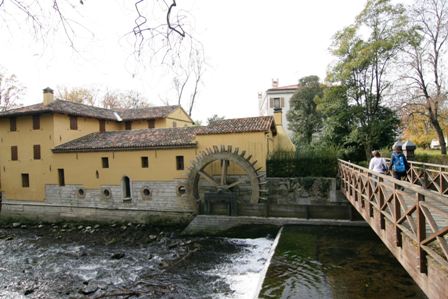 Cinto Caomaggiore
A route about 7.5 km long links Summaga to Cinto Caomaggiore (directions: via S. Benedetto, via Treviso, via Maule, via Braida, via Zamper). The history of this small ancient Roman town is linked with the Abbey of Summaga. In the old part of the town you might as well visit the parish church of San Biagio; in Settimo, one of its administrative divisions you ought to call at the parish church of San Giovanni Battista.

Belfiore watermill
From Pramaggiore you can reach Belfiore watermill easily. Liying on Loncon River, it has been recently rehabilited and evidences, from an ethnographic viewpoint, the intense grinding activity which was carried out along the rivers in Portogruaro area. The millstone room, the room where tools were stored as well as its millers' houses in the other wing of the building merit a visit. 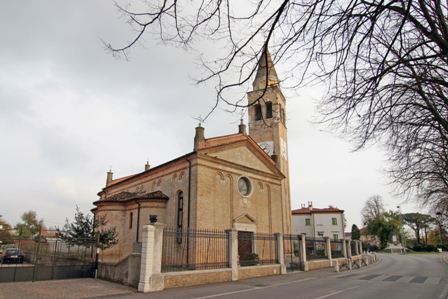 Annone Veneto
Back in Pramaggiore, take via Callalta, via Belvedere and finally via Postumia: after a 5.3 km journey you hit Annone Veneto. It played an influential role during the Middle Ages, and then under Venetian domination it kept its importance. Besides its outstanding buildings, you ought to visit San Vitale church, Villa Polvara as well as Casa Giannotto, housing beautiful 16th-century frescos. Its woods provided timber to make the vessels of the Most Serene Republic of Venice; unfortunately its valuable forest stand was destroyed during World War I.

Corbolone
From Annone Veneto head to Corbolone, 6 km far away. To get there, take via Trieste, via Giai, via Fosson, Via Annone and Riviera di Corbolone. Here you can see the canal dropping and merging with a few other streams. The parish church of San Marco in Corbolone merits a visit, since it houses precious paintings by some Venetian painters.

San Stino di Livenza
A 2 km route leads you to Santo Stino di Livenza. In this town you find some striking buildings dating from Venetian domination. Villa Zeno, for instance, was built on the ruins of an ancient castle; Villa Rubin, Villa Calzavara as well as Villa Agazzi merit a short visit, too.