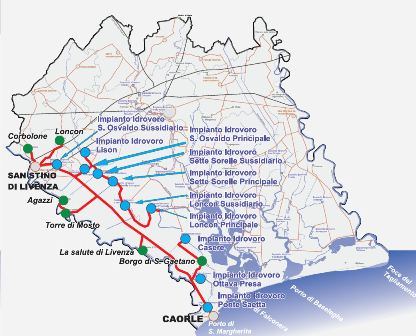 A route going from Santo Stino di Livenza to Caorle through the reclaimed lands and the towns along Livenza riverside. The direct road connection is 25 km long; the suggested journey is longer because of the several diversions you make to visit some water scooping plants. There is also an alternative itinerary following Livenza's flow.

San Stino di Livenza
In this town you find some striking buildings dating from Venetian domination. Villa Zeno, for instance, was built on the ruins of an ancient castle; Villa Rubin, Villa Calzavara as well as Villa Agazzi merit a short visit, too. Hydraulic structures near Santo Stino di Livenza
Before heading to Carole, you ought to visit a few water scooping plants lying between S. Stino and Loncon.

Loncon
Retracing your path to S. Stino city centre, stay on via Fosson until you arrive at Loncon, 4 km away from S. Stino di Livenza. 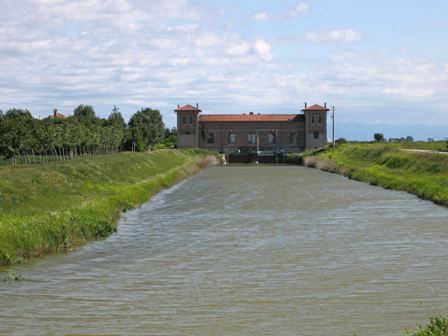 Sette Sorelle main water scooping plant (E=12:46:21,149; N=45:42:54,222)
At the next crossroads on SP59 you find the big Sette Sorelle main plant. The place name "Sette Sorelle" is already recorded in maps dating from the early 19th century. The big main water scooping plant, whose circulation is 9,000 litres/second, was planned by Ing. Dal Prà in 1928, when the homonymous 2,787 ha. basin was reclaimed. Later on, its attendant's house and other local facilities were built close to the plant premises. 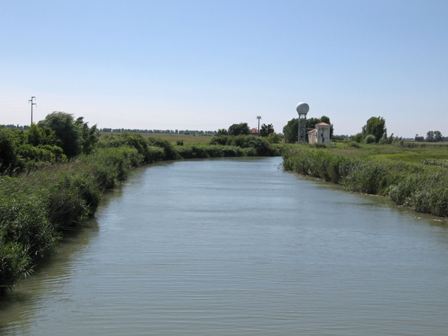 Loncon auxiliary water scooping plant (E=12:47:09,579; N=45:41:38,425)
Go back onto SP59, stay on straight until it merges onto SP67 (via Contarina). At this point you can make a short interesting diversion to visit Loncon reclamation basin. Turn left and go straight until you reach and cross Loncon River, then go on the riverside road until you arrive at Loncon auxiliary water scooping plant. Built in 1948, this water scooping plant does not work any more. It houses the premises for one of ARPAV weather stations, which was set up in cooperation with the Land Reclamation Syndicate.

La Salute di Livenza
Go back onto Loncon riverside until you reach again Loncon auxiliary plant. Cross the canal and take via Contarina, then take the road to Caorle. Follow it for 3.8 km., turn right to visit La Salute di Livenza's built-up area. It is an administrative division of Santo Stino di Livenza municipality. 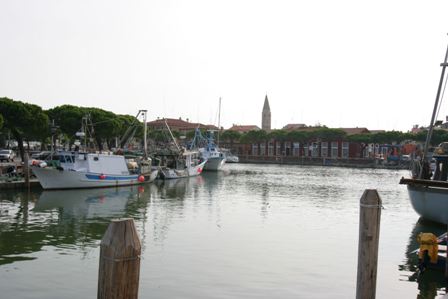 San Gaetano
Strada Ottava Presa meets the straight road heading to San Gaetano, a place deserving a visit. It is a hamlet built around the villa, which belonged to Franchetti's family, where Ernest Hemingway stayed for a short time. This family played an important role in the local history, since it promoted land reclamation of the surrounding area.

San Gaetano water scooping plant (E=12:52:36,384; N=45:38:38,420)
It dates from the early 20th century and proves the efforts done by the Franchetti to reclaim their lands for agricultural use; in fact, they have owned the great San Gaetano estate from 1879 up to the postwar period.

Ponte Saetta water scooping plant (E=12:52:43,779; N=45:36:19,909)
In San Gaetano take SP to Caorle and follow it for about 8 km. In the outskirts of the town you can visit Ponte Saetta water scooping plant. This plant, dating from 1932, is called after the homonymous canal and serves Sansonetta - Sesta Presa _ Palangon basin as well as Caorle built-up area. Its circulation is 2,650 litres/second.

CAORLE
It is an old port city, a bishopric as well as a noted holidays resort. Its cathedral is charming and houses valuable works of art - e.g. the Byzantine golden reredos. Visit also the 18th-century church of the Blessed Virgin of the Angel, which is built on an evocative site.